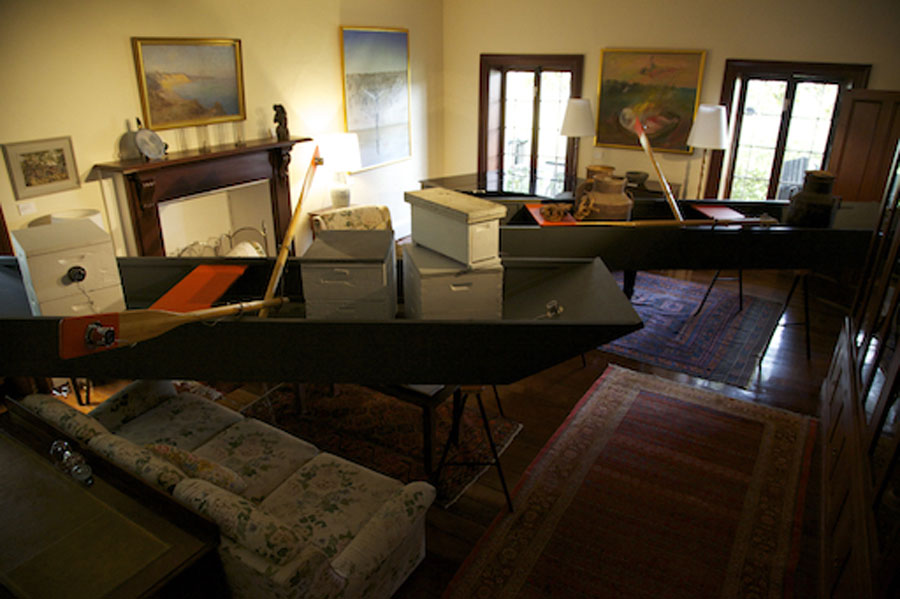 Milk and Honey, an eight channel sound installation was commissioned for SiteWorks 2012 by the Bundanon Trust.  The work was installed in the music room of the old Homestead and incorporated the Steinway piano.

A land flowing with Milk and Honey the phrase from Exodus that describes the agricultural plenty of the chosen land.  Early colonial settlers to the Shoalhaven region forged their own path towards this metaphor of plenty in a life that melded European practices and stereotypes with a landscape chosen but unknown and perhaps unknowable.

As if stranded by some ancient flood, two sonic river punts float in the Bundanon Homestead, carrying cargoes of Milk and Honey, sounding out their riverine environment with fragmentary voices in a strange new world.

A short documentary video of Milk and Honey (put together by Mike Leggett) that shows the disposition of the audio actuators.

His eyes shall be red with wine, and his teeth white with milk.
Is it a small thing that thou hast brought us up out of a land that floweth with milk and honey,
to kill us in the wilderness, except thou make thyself altogether a prince over us?
For when I shall have brought them into the land which I swear unto their fathers,
that floweth with milk and honey; and they shall have eaten and filled themselves,
and waxen fat; then will they turn unto other gods, and serve them, and provoke me, and break my covenant.

Listen to a short stereo mix designed to give an impression of the eigth channel audio actuator driven soundscape.

And in a more prosaic, if not cryptic turn, extracts from the 1880’s farm diaries, also incorporated into the x8 channel mix – a poetry of pragmatism that focusses on interactions with the River, Plants and Animals.

New Piano Sheet music from England
Sent my poem to Watson
Filled out Agricultural returns
Hand picked corn in new paddock
Threshed corn until dinner
Went fishing with the girls and got some herrings
Picked some mulberries for jam
Shipped 23 bag of corn onboard the punt
Took racing boat down river
Shut up the pigs
Herded horses in little flat
Cattle broke into corn
Took honey out of boxes
River up a little
Cut down Irish thistles
Drummed down a swarm of bees
Went into bush after a bees nest but got no honey
Mother cut up peaches
Jimmy would not bring down his punt as river too high
Went over to peddlers boat
Wrote to Bob, got no prizes
Shipped 22 bags of corn on punt
Picked preserving dish full of grapes to make jam
Got a small swarm of bees
Mother practiced her hymns
Mother had a yarn with Hugh at Cowtails
Caught some fowls to send down by peddlers boat
Drummed down a swarm of bees
Mother cut up some quinces and hung them to dry
Took some eggs to peddlers boat
Boys went shooting and got four pigeons and a lot of parrots